Biden accuses Putin of being behind the world's crises 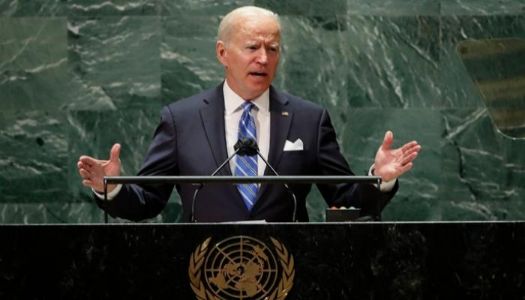 Amid the aftermath of the war in Ukraine, US President Joe Biden said that Russian President Vladimir Putin threatened Europe "nuclear", referring to Moscow's talk of its military options, adding that Russia had launched military operations without being threatened.

Asserting that Washington refuses to use force to overrun nations, the US president noted that the US has provided unprecedented economic and military aid to Kiev

Biden continued that his country was working with partners to prevent Russia from assaulting NATO states, adding that Moscow had sought the current conflict in Ukraine.

Accusing Moscow of violating the fundamental elements of the Charter of the United Nations, the US President said that Russia's aim through its military operations was to abolish Ukraine's presence as a State.

Biden acknowledged that the world was experiencing major crises, accusing his Russian counterpart Putin of being behind what was happening, referring to Ukraine's war role in fueling the situation.

In the food security file, the US president explained that Western sanctions against Russia allowed it to export cereals, and then called on all countries to refrain from banning food exports.

On another level, Biden spoke of the worsening of the world's climate change bill, citing an urgent need to deal with and address existing risks.

We have 156 guests and no members online