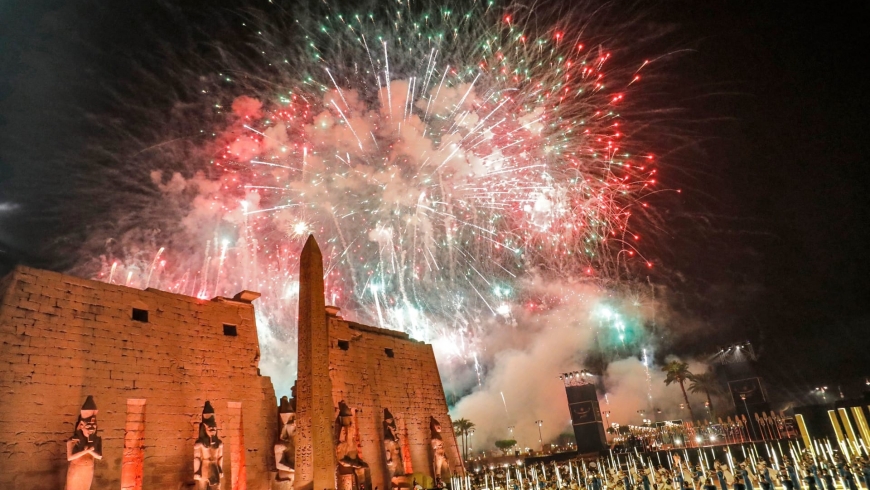 With a "dazzling" ceremony to open the Kabbash Road in the country's southernmost city, Egypt succeeded in drawing the world's attention to it.

In a majestic festive atmosphere that blended modern technological influences with ancient history, Egypt re - opened the archaeological road, which dates back 3400 years.

The ceremony featured an artistic performance that emulated some aspects of the ancient Egyptians' celebration of Opt. Hundreds of Egyptian university students participated in Faraoun costumes, and was witnessed by President Abdel Fattah al-Sisi, several members of the Government, foreign ambassadors and Arabs.

The ceremony came a few months after Egypt organized a majestic mob through the streets of Cairo, transferring 22 royal mummies from the Egyptian Museum of Liberation to the National Museum of Civilization in the area of Fassatat.

On Facebook, the official page of the United States Embassy in Cairo paid tribute to the opening of the Kabbash Road.

Following the ceremony and in a post, the Embassy said: "I salute the organizers of the shorter celebration, this remarkable event in one of the world's most ancient cultural sites. The United States is proud of its partnership with Egypt to preserve and protect World Heritage sites for present and future generations, invest more than $100 million and provide vital jobs for the country's tourism sector."

European Union spokesman Luis Miguel Buenos expressed his admiration for the ceremony, tweeting: "Like many around the world, I follow the opening ceremony of the New Way of Kabbash. Congratulations to the mother of the world. Egypt. "

The British Times said that "the opening ceremony of Egypt's Al-Kabbash Road has been for 3500 years."

The British Daily Mail paid tribute to the ceremony, saying that Egypt had unveiled what it described as a "holy road" lined by thousands of statues, and was used as a parade route for the gods 3, 000 years ago.

"This 1.7-mile road is called Abu al-Hul Street, with more than 1050 statues of Abi al-Hul and al-Kabbash connecting the temple of Karnak in the north to the temple of the shortest in the south," the newspaper noted.

The Spanish newspaper El Comercio reported on the ceremony, saying that Egypt "dazzled the world with the opening of the Al Kabbash Road, which is a huge project that will transform the city of Al-Qasr into an open museum that dazzles visitors and is of great cultural importance."

We have 544 guests and no members online