The terrifying rocket. China hangs up and America's waiting 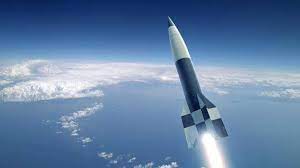 Following Western media reports that Beijing has tested a new type of missile with a supersonic velocity, described as a "terrifying weapon," Chinese foreign spokesman Zhao Lijian told reporters that the experiment belonged to a spacecraft.

The speaker added: "This test was a routine spacecraft experiment aimed at testing the reusable spacecraft technique."

This technology, which is increasingly being developed by space companies around the world, would significantly reduce the cost of space launches.

The British newspaper "Financial Times" reported that Beijing had tested a new type of rocket this summer, noting that it had conducted an experiment on a "spacecraft," and after pressing for it to explain whether the newspaper's report was wrong, Chow responded positively.

According to the British newspaper, according to sources who said they were familiar with the test, in August Beijing launched a missile capable of carrying a nuclear head that flew around the Earth on low orbit before landing towards its 32-kilometre target, according to three sources.

But he declined to comment on the "Financial Times" report on Beijing & apos test of a nuclear - powered faster - than - sound missile.

Austin was speaking at a press conference during a visit to Georgia.

Along with Beijing, the United States, Russia and at least five other countries are developing hypersonic technology.

Ballistic missiles fly at high altitude in space in an arc-shaped path to reach their target, while missiles that outstrip them

The speed of sound is on a low path in space and it can reach its target faster.

More importantly, the hypersonic missile can be controlled, making it more difficult to track and intercept.

Countries like the United States have developed systems designed to defend themselves against ballistic and cruise missiles, but nothing is known about the ability to track and shoot down an hypersonic missile.

We have 490 guests and no members online