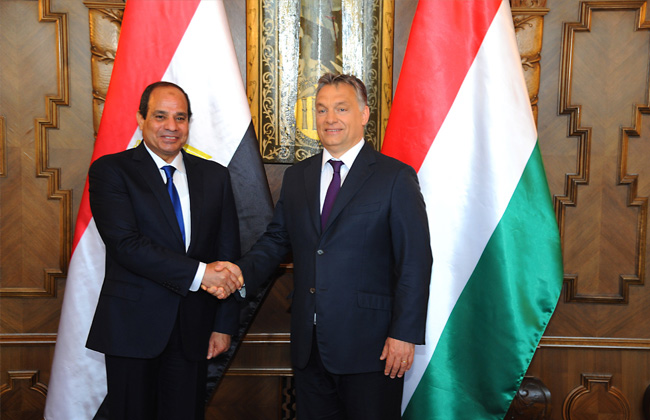 Egyptian President Abdel Fattah al - Sisi today thanked Prime Minister Viktor Orban of Hungary for his invitation to participate in the events of the "Waltersrad" summit, which was followed by bilateral talks that he described as "always fruitful in all areas."

During a joint conference, following discussions in Budapest, President Sisi expressed his appreciation to the Prime Minister of Hungary for his vision, management and understanding in the region and in the Eastern Mediterranean.

He said that the Hungarian government provided early support, and trusted Egypt's ability to overcome the difficult conditions experienced in the country in 2011, 2012 and 2013.

The President of Egypt participated in the meeting of the Waltersrad Summit, which includes Hungary, Poland, the Czech Republic and Slovakia. Cairo described it as a presidential forum that Egypt is very interested in holding on a regular basis.

During the Summit, he spoke to the President of Abdel Fattah el-Sisi in various cases, chief among which was the problem of migration in Africa and human rights in his country.

According to El-Sisi, Egypt had received 6 million citizens from Africa and other countries. "We have no refugee camps, and they live like Egyptians. They learn in our schools and are treated in our hospitals, even vaccines. "

During the summit, held in the tried capital of Budapest, El-Sisi questioned Europe's willingness to relocate part of its industry and settle in Egypt, and to provide employment opportunities for young people.