America marks the twentieth anniversary of the September attacks shortly after the end of the war in Afghanistan. 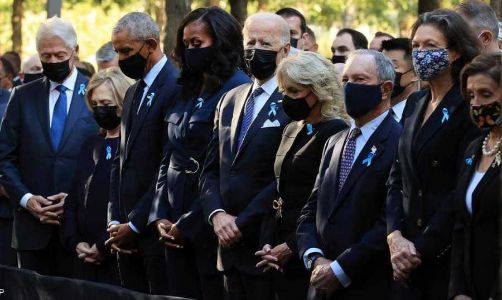 At an official ceremony attended by the US President, Joe Biden, and former Presidents, the US commemorated Saturday, the 20th anniversary of the 11 September terrorist attacks.

The American President, Joe Biden, and his wife, Jill, participated in the New York City Memorial Service, and former Presidents Barack Obama and Bill Clinton lined up with him.

Former President George W. Bush, Jr., and his uncle Laura chose to participate in a similar ceremony in Pennsylvania, which saw a civilian plane shot down, hijacked by Al Qaeda terrorist elements during those attacks.

The ceremony began in New York with a minute of silence at 8:46 a.m. local time, exactly 20 years after the first plane hit the North Tower of the World Trade Center.

American victims and others arrived at the memorial to commemorate the attacks, which killed some 3,000 people.

Relatives of the victims, many in tears, read out the names of those killed in the attacks during the ceremony.

The city of New York, which witnessed the majority of those deaths, is commemorating seven events throughout the day.

Biden leaves New York after attending a Mass in the city over the lives of the victims, who fell in the towers of the World Trade Center to Pennsylvania.

This state saw United Airlines flight 93 crash into a field after passengers beat the hijackers and prevented them from colliding with another target.

At the end of the day, Biden will return to Washington to visit the Pentagon, which was attacked by another aircraft used as a missile on the day.

The commemoration of the attacks comes shortly after the end of the United States-led war in Afghanistan, which lasted almost 20 years to eliminate Al Qaeda, which carried out the September 11 attacks.

Biden is not expected to address any of the three locations, but he posted a video Friday in which he expressed condolences to the families of the victims and highlighted the national unity that resulted, even in principle, from the terrorist attacks.