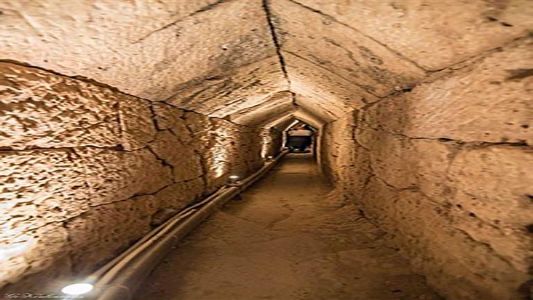 In the area of an ancient temple in the Abu Sir area near Alexandria, archaeologists of Egypt, excavating a wide tunnel under the temple, discovered, it is believed that it probably leads to the place where the Queen of ancient Egypt "Cleopatra"was buried.

The Egyptian Ministry of Tourism and Antiquities said in a statement posted on its Facebook account that the Egyptian-Dominican archaeological mission of the University of San Domingo, headed by Kathleen Martinez, succeeded in uncovering a tunnel carved into the rock at a depth of about 13 meters below the ground surface during the archaeological excavations of the mission in the area of the temple of tabosiris magna, that is, the "Tomb of the great Osiris", west of Alexandria.

The ministry's statement quoted the secretary general of the Supreme Council of Antiquities, Mustafa Waziri, as saying that the tunnel is about 1,305 meters long, and about two meters high, and two alabaster heads were found near the temple, one of which is for a Ptolemaic person, and the other is likely a statue of the Sphinx.

Kathleen Martinez explained that preliminary studies indicate that the architectural design of the discovered tunnel is very similar to the design of the yubilinos tunnel in Greece, but it is longer than it, calling it an"engineering miracle".

She added that during the excavations and Archaeological Survey of the tunnel, a part of the tunnel was discovered submerged under the waters of the Mediterranean Sea, and a number of pottery pots and ceramic jars were found under clay deposits, in addition to a rectangular block of limestone, and by completing the excavations, many archaeological evidences have proved that there is a part of the foundations of the tabosiris magna temple submerged under water, which the mission is currently working to uncover.

It is noteworthy that according to scientific sources, at least 23 earthquakes struck the Egyptian coast between 320 and 1303 AD, which led to the collapse of part of the tabosiris magna temple and its sinking under the waves.

It is worth mentioning that during the previous excavation seasons, the expedition managed to find many important artifacts inside the temple, including coins bearing the images and names of Queen Cleopatra, Alexander the great, a number of headless statues, statues of the goddess Isis, in addition to inscriptions and busts of various shapes and sizes.

According to foreign media reports, a tunnel carved into the rock considered to be an "engineering miracle" has been discovered at a depth of 43 feet under an ancient temple that may lead to a long-lost burial site of the last pharaoh ruling Egypt, namely Cleopatra, and her lover Mark Antony.

"If there is a 1% chance that the last Egyptian queen will be buried there, it is my duty to look for her," Martinez said in a statement to Heritage key.

"This is the first time that any archaeologist has found tunnels and passages underground and inside the walls of the temple, so we have changed what they know about geometry forever,"she added.

The archaeologist believes that after Mark Antony himself was killed after his defeat before Caesar Augustus, also known as Octavian, Cleopatra made detailed plans for both of them to be buried there, in echoes of The Legend of ISIS and Osiris.

Martinez, who has been working at the tabosiris magna temple for more than 15 years, told National Geographic: "Cleopatra negotiated with Octavian to allow her to bury Mark Antony in Egypt.. She wanted to be buried with him because she wanted to recreate the myth of ISIS and Osiris," noting that the true meaning of the cult of Osiris is that it grants immortality.

It is believed that after their death, the gods allowed Cleopatra to live with Antonio in another form of existence, so that they would have eternal life together.

Two years ago, the team reported the discovery of the mummies of two high-ranking ancient Egyptians, one male and one female, the mummies remained undisturbed for 2000 years, but in poor condition in terms of preservation because water had seeped into the tomb, but they were originally covered with gold leaf, a luxury reserved only for elite members of society, suggesting that they personally interacted with Cleopatra.

We have 71 guests and no members online