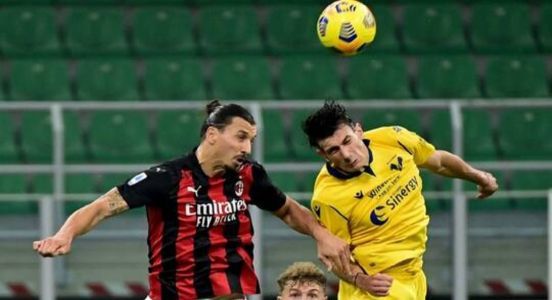 Veteran Swedish star Zlatan Ibrahimovic missed a third penalty this season, but saved his Milan team from losing to Verona on Sunday, by scoring a 2-2 draw at the time of the "killer".

Ibrahimovic, 39, missed a golden opportunity to visit Verona in the 66th minute, when he missed a penalty kick, before he made up for it and scored a "fatal" goal with a header, in the third minute of the calculated time instead of lost, to give his team the equalizer point, which strengthened It is at the top of the Italian league with 17 points.

According to the "Opta" network, which specializes in football player statistics, Ibrahimovic became the first player in Milan's history to score in seven consecutive Italian League matches since the introduction of the three-point award system for the "Calcio" winner, that is, since the 1994/1995 season.

"Ibra" is currently top scorer in the Italian league with eight goals, and is two goals ahead of Juventus striker, Portuguese star Cristiano Ronaldo.

In general, Ibrahimovic played nine games with Milan in all competitions this season, during which he scored nine goals and scored two goals.