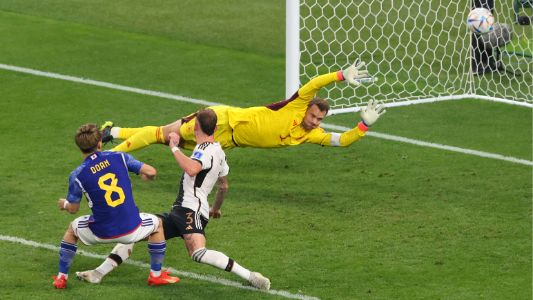 In his first match in Group V against Costa Rica at the Qatar World Cup , the Spanish national team achieved a historic victory at the World Cup, scoring seven goals without reply

With this big victory, the Spanish national team tops the standings of Group V, followed by the Japanese national team, which achieved a big surprise today by beating Germany by two goals to one.

The Moroccan national team also earned a precious point at the World Cup tournament, as it drew negatively with its Croatian counterpart.

The match between Morocco and Croatia was held at the home stadium as part of the first round of the Group VI competitions, which also includes Belgium and Canada.

The national teams of Belgium and Canada will meet at seven in the evening GMT at the Ahmed Ben Ali Stadium.

The Moroccan national team is participating in the World Cup for the sixth time. And this is the sixth draw of the"Atlas Lions" in their participation in the finals, for two wins and nine defeats.

With this draw, the Arab national teams continue their good results at the Qatar World Cup, where Saudi Arabia beat Argentina by two goals to one, while Tunisia drew with Denmark.

The "Atlas Lions" will play against Belgium in the second round of matches of this group on Sunday, before facing Canada in the third round on Thursday.

In the fifth Group, the Japanese team achieved a surprise of a high caliber by defeating the German team with a long history in the World Cup by two goals to one, in the meeting that was held at the Khalifa International Stadium.

With this surprising result, the task of the German national team to climb to the second round was complicated in the presence of the strong national team of Spain, along with Costa Rica.

The German players caught the eye with a collective pose during the pre-match photo shoot, as all the players put their hands to their mouths.

The German Football Association issued a statement explaining the reason for the image, saying: "we wanted our captain to wear a badge of leadership in support of our principles that we believe in in the German national team: diversity and mutual respect. We, along with other teams, wanted our voice to be heard. It was not about taking a political position, human rights are not negotiable,"he said.

The statement added: "human rights should be guaranteed to everyone, but this is not the case now. That's why that message was important to us, and preventing us from wearing the badge was silencing our voices. We stand by our position".

The captain of the German national team, Manuel Neuer, and the leaders of other European national teams had been seeking to wear a gay support badge, but FIFA refused.