The World Cup .. France sweeps and rains down Australia's nets with a quadruple 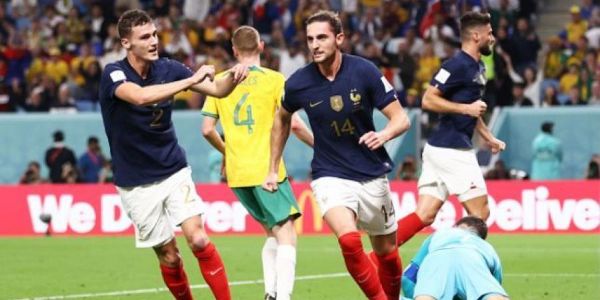 In their first match in Group IV of the Qatar 2022 FIFA World Cup, the French national team swept their Australian counterpart with a score of 4-1 at the South Stadium in Al Wakra،

After the "Roosters" team was late with an early goal that worried its fans for a short time, Olivier Giroud scored two goals to equal Thierry Henry's record as the best scorer in the history of the national team.

France topped the group with 3 points, while the Tunisian and Danish national teams share the second and third places with one point each, and Australia tops the group without a credit.

The French national team began the campaign to defend their title in the best possible way, after Australia took the lead at the beginning with an early goal by Craig Goodwin

The French national team is in the midst of this tournament in the absence of many influential players, most notably its top scorer Karim Benzema, who won the Ballon d'or this year, who was injured two days before the start of the tournament, and the midfield duo Paul Pogba and N'golo Kante, who played a big role in the team's coronation for the second time in its history in 2018.

The starting lineup included 6 players who played in the final 4 years ago.

Giroud replaced the veteran Italian Milan striker Benzema to play alongside Mbappe, scoring a double that equaled the record number of goals with France, which was held by Thierry Henry

The match was a replay of the meeting of the national teams of the World Cup of Russia, which ended with the victory of France 2-1

We have 139 guests and no members online