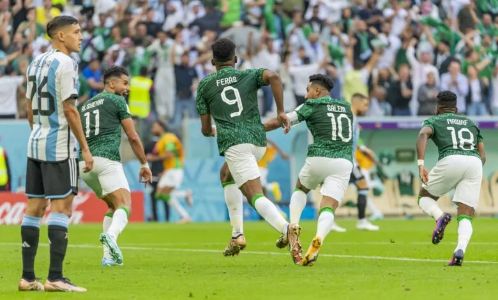 In the confrontation that brought them together today in the opening matches of the two teams in Group III of the Qatar World Cup,the Saudi national team achieved a historic victory after beating its Argentine counterpart by two goals to one goal

Despite the progress of the Argentine national team in the first half, and the cancellation of 3 Tango goals for offside, Saleh Al-Shehri managed to equalize by the beginning of the second half, before Salem Al-Dosari added the second goal in a great way in the net of Argentina goalkeeper Martinez.

This victory is the first opening victory for Saudi Arabia in its sixth appearance at the World Cup, where Al-Akhdar has never won in its first match.

Saudi Arabia also managed to become the first Asian team to beat Argentina with more than one goal in the history of the World Cup, Messi, Maradona and Batistuta have never conceded two goals in their history against a team from the yellow continent.

Saudi Arabia has cemented Messi's knot, as this is the second time that Flea has faced the Saudi national team, drawing the first in 2012 negatively, before losing.

The Argentine star Lionel Messi, on whom much is counting in the 2022 World Cup, played only one match against the Saudi national team, and it was a friendly in 2012, which ended in a goalless draw, before losing in today's confrontation.

The Saudi national team managed to surpass the group stage once in its history in 1994, as Al-Akhdar seeks to repeat the same achievement.- Continuous Argentine attempts and Alois is in the right place.

We have 141 guests and no members online