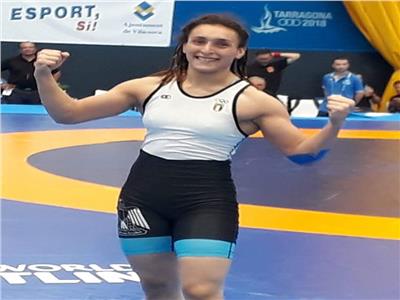 In the first time in the history of Egyptian women's wrestling, the player of the first Egyptian senior wrestling team, Samar Hamza, achieved a major achievement by rising to the

final role at the world championships currently held in the Serbian capital Belgrade, after winning the runner-up of the 2021 Estonian world champion, Ibe Mayi by 3/2.

The player began her campaign in the current tournament, which began on September 10 and runs until September 18, by beating Canada's Justina de Stasio by 3/1.

Samar Hamza had qualified for the semi-finals of the World Championship, after beating the Austrian champion by 1/3.

The official Facebook page of the International Federation of Wrestling highlighted the achievement of Egyptian player Samar Hamza and posted a photo of the player with the words "The makers of history" inscribed.

Commenting on this achievement, the Secretary-General of the Egyptian Wrestling Federation, Mahmoud El Sayed, said that it was a historic win and an important stage in Egyptian women's wrestling and would have a significant reflection on the development of that sport in Egypt.

He revealed that Egypt is a sole player in the current World Wrestling Championships, Samar Hamza, who was able to lift Egypt's name and win all the matches until she reached the final.

That was the first time Egypt had reached the final at the World Women's Wrestling Championships, and that had been the result of a good preparation and interest in that game by the Egyptian state.

Summer at last year's World Championships achieved a bronze medal for Egypt and reached this year's final confirms that it reflects the development of women's wrestling in Egypt.

During the year, Egypt had also clinched the African Women's Wrestling Championship title from Tunisia, which had been on its throne for years, and Egypt was determined to achieve further achievements in that area.