Nunes and Salah save Liverpool from sudden loss to Fulham 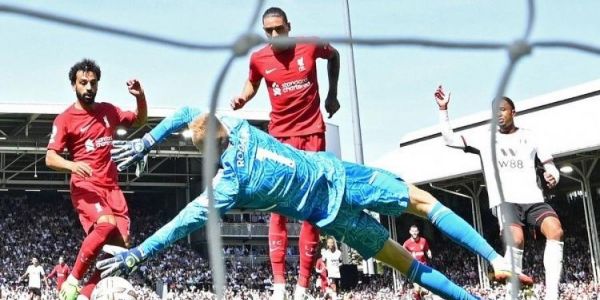 Scoring the goals of the 2-2 draw at Kraiven Cottage in west London in the first phase, Uruguayan forwards Darwin Núñez and Egyptian Mohamed Salah saved their Liverpool side from a shock loss to hosts Fulham returning to the English Football League.

Liverpool entered the game high with the Community Shield with a banner score on Manchester City 3-1 their traditional rivals last Saturday, but came out with the lowest losses after a modest display over the 90 minutes.

Liverpool's German manager Jurgen Klopp played the match in the same line-up as the Community Shield, except for the return of Brazilian goalkeeper Alisson between the three woods instead of Spain's Adrian.

Despite Liverpool's considerable possession of the ball, Fulham were the most dangerous team until they were able to open the scoring by their top scorer Metrovic, who rose to a cross from Dutch right-back Kenny Tete over Trent Alexander-Arnold to net despite Alisson's intervention (32).

Liverpool threw all their weight and once again succeeded in equalling the numbers with the effect of a long front ball from Arnold exchanged by Salah and Núñez, preparing for the latter, following it with quiet nerves inside the net from a short distance (81).

It is the sixth time that Salah has scored in Liverpool's opener.

The last 10 minutes saw no danger to the two sides except for Liverpool captain Jordan Henderson's shot at the bar in the final seconds to knock each team out with one point.