With a thrilling victory over City led by Salah and Nunez.. Liverpool score " Community Shield" and level with Arsenal 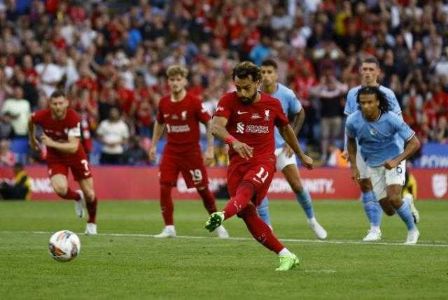 After a dramatic chapter of rumours and speculation Liverpool lived around the departure of their most prominent stars, first of all Salah, the club decided the future of last year's league MVP by tying him to a new contract.

On Saturday, Liverpool won the EFL Community Shield, combining the two English Premier League champions with the Cup competition by beating Manchester City 3-1 Saturday at the King Power Stadium in Leicester. at the expense of Manchester City.

The Reds won this charitable shield after beating Pep Guardiola's sons by three goals to one, during the King Power Stadium match.

21 minutes after the start of the meeting, Trent Alexander-Arnold gave Liverpool the runner-up, following an assist from Egyptian star Mohamed Salah. But newcomer Julian Alvarez equalized for Man City in the 70th minute 12 minutes after his participation.

Drewen Nunez caused a penalty after a handball on Robin Diaz, the referee calculated it after a VAR review, and Salah successfully executed it seven minutes before the end.

Núñez, who joined Liverpool this season from Benfica, added the third goal with a header from close range in the fourth minute of stoppage time.

It is Liverpool's 16th title in the competition and their first since 2006, on par with Arsenal, with Manchester United holding the record for wins with 21 titles.