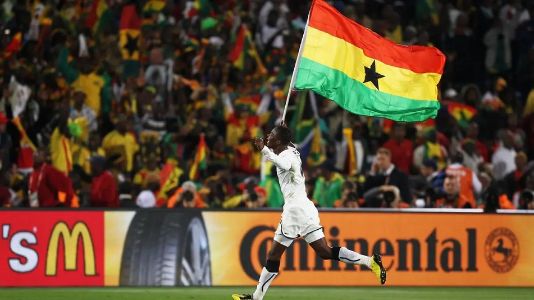 After Ghana blew a resounding surprise and with a young squad of stars overwhelmed by Nigeria's elimination in the World Cup play-off and stepping up to the World Cup, they

were sidelined. "Young Heroes" now, with Ghana heading for an extraordinary plan, by naturalizing many well-known players in Europe, of Ghanaian origin, to participate in the 2022 World Cup and increasing opportunities "Black Stars" repeated the success of the 2010 World Cup, when the national team reached the quarter-finals.

In the past months, the Ghana Federation has moved intensively, to negotiate a number of stars around the world, to transform their European loyalty and represent Ghana's team.

Athletic Bilbao star Inaki Williams announced on Tuesday that he was representing Ghana in a new surprise, reinforcing the team's attacking power.

The "Spanish" star, like the "La Ruja" team, in one international match, prompted the Ghanaian Federation to move and convince him, especially since his parents were Ghanaian, allowing him to acquire Ghanaian citizenship, despite his birth in Bilbao.

In addition to Williams, the Ghanaian national team convinced a number of Premier League players to represent Ghana in the World Cup.

These full-back Tariq Lamptey, Brighton star, Chelsea winger Callum Hudson-Odoi, and Arsenal rookie striker Eddie Nketiah, all of whom represented the English youth team or the first team, before facing reality, highlighted that they would not represent the "Three Lions" at the World Cup.

Southampton's in-form defender, Mohamed Salisu, has also announced his willingness to represent his country, although he has not made any previous appearances for the "Black Stars."

The International Football Federation allows players to convert the team they represent into another team, in the event that they have not played more than 3 caps for the first team, and the three games must also be outside the major leagues.

This allowed the Ghanaian team to "recruit" stars who had not played a large number of international matches, and had Ghanaian origins.

With this plan, Ghana has significantly raised its chances of competing in the World Cup and qualifying from its eighth group, comprising Portugal, South Korea and Uruguay, for decisive roles.