With a record... Marcelo deposits the real after 15 years 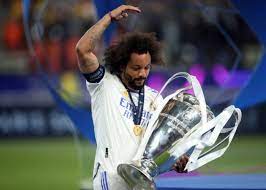 After 15 years at the Bernabeu with the Royal Club, Brazilian defender Marcelo said goodbye to Real Madrid

Marcelo went into tears during the farewell conference organized by his club Real Madrid on Monday, in the presence of his teammates, technical director Carlo Ancelotti and club president Florentino Perez.

Marcelo said in his speech: "It was a great adventure. Today I leave this as the player who won the most titles in the history of the best team in the world. "

"It's not goodbye because I don't think I'm leaving Real Madrid."

In turn, club president Florentino Perez said: "Today will be full of emotions for all Real Madrid fans, today is a special day full of memorable memories, we want to pay a passion to our great leader, the young man who became a man in the Santiago Bernabeu, for one of our great legends. We are talking about the highest number of titles in Real Madrid, Marcelo ".

Marcelo, 34, leaves the royal team after becoming the most rewarding player in history, passing legend Baku Khinto's credit with Real, when he was crowned La Liga in the season to be his 24th Champions League title.

Before boosting this balance with  the Champions League title to take his tally to 25 titles with Real.

We have 123 guests and no members online