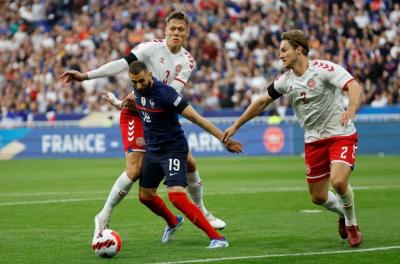 At home and in the midst of the campaign in the third edition of the UEFA Nations League, and at Stade de France, 6 days after the Champions League final, world champions

and defending champions France fell to their first 1-2 defeat by Denmark after they were the first to score via Karim Benzema.

Stade de France" was Friday on a date with the fall of world champion and defending champion France at the start of their third UEFA Nations League campaign, which saw the Netherlands beat Belgium in the latter stronghold 4-1.

While Croatia was runner-up to France in the 2018 World Cup, the Roosters also disappointed by receiving a humiliating home defeat to Austria by a clean treble in the second game of the same group, leading Austria on goal difference against Denmark before their clash on Monday at home, with France as hosts against Croatia.

In Group IV, Belgium and Manchester City's English star Kevin De Bruyne grumbled about these matches immediately after the end of the leagues and continental club competitions, falling to the Netherlands in Brussels 1-4 after trailing by a clean quad. After a run of 6 consecutive matches without a win against the "Red Devils", if friendly or official, the Netherlands finally won and emerged victorious from Belgian soil for the first time since 1996 in the 1998 World Cup qualifiers.

We have 230 guests and no members online