A day is the "winning horse" of the Arabs in the Barilambad. 7 medals in one day 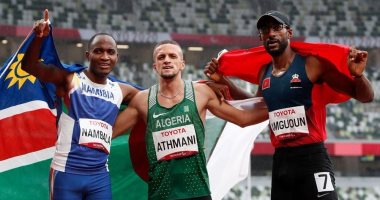 The ninth day of the Tokyo 2020 Paralambad competition currently held in Japan is the winning horse for the Arabs at this Olympics with seven medals at once.

The Algiers Mission scored two new golds through runner Iskandar Jamil Osmani in the final of the F13 400 metres, and his teammate Safia Jalal in the F57.

On the same day and the same race in which the Algerian Iskandar Osmani took gold, Moroccan Mohamed Amkon placed second and took the silver medal.

Egypt's mission also secured a new medal through Mohamed Al-Zayat, a taekwondo player who won the silver medal in the 61 kg competition.

In the ninth competition, Algeria and Tunisia accounted for 9 medals each. Algeria earned 3 gold, 2 silver and 4 bronze, and Tunisia for 3 gold, 4 silver and 2 bronze.

It should be noted that the paralumbiad competition began on 25 August last and lasts until 5 September.

We have 130 guests and no members online