To encourage the Three Lions... Boris Johnson encourages his country's team in his own way from in front of his house 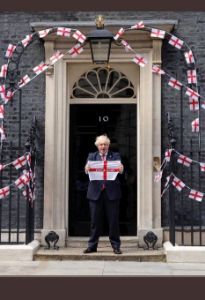 The British Prime Minister, Boris Johnson, decorated his home front by informing his country to encourage the Three Lions, one day before the Euro 2020 Football Final, which will bring together England and Italy.

Johnson showed up with the England flag in parallel with No. 10 at the door of his home, referring to his winning goal-scoring final, which the British team has been counting on since the 1966 World Cup.

Johnson also showed his support for the team through the pin with the flag badge on his suit.

The British Prime Minister, Boris Johnson, is preparing to give the British a public day off if the British team win the 2020 European Championship Cup and "bring it home."

More than a 346000 people signed a petition demanding leave from work on Monday, demanding a day off in the event of a win, and considered that "it would be useful and reasonable to give the country a day off the next day if England won."

Schools and companies are already planning to open their doors late Monday to allow audiences to celebrate late at night.

It is reported that the English team will meet its Italian counterpart, on Sunday evening, at Wembley Stadium in the capital city of London, in the first grand final of the English team.

We have 351 guests and no members online