A scientist talks about the emergence of a comet that may be a "harbinger" of imminent disaster! 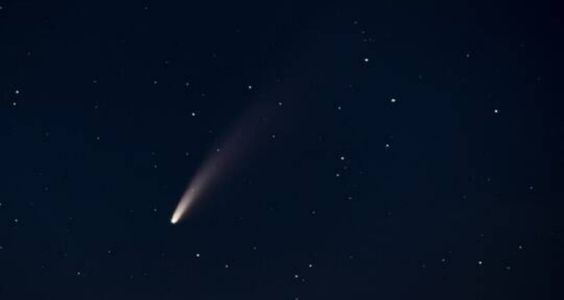 Predictions of the end of the world have spread throughout history, and an astronomer drew attention to the ominous comet NEOWISE, which blew up in the sky shortly before the outbreak of the Corona virus pandemic in the world.

Throughout history, people have looked at the sky to know what to do next; To predict an event that may be around the corner, whether it is to know what kind of weather is expected, as a sign that something is wrong, or perhaps in an attempt to search for life outside the planet.

Since ancient times, celestial phenomena have been intensely examined as signs, foreboding that troubled times await.

This is especially true of comets, whose viewing has coincided with catastrophic natural disasters and historical landmarks more than once.

When comet NEOWISE blasted across the sky in March, something bad will soon be revealed, as suggested by astronomer Paul Truelove.

Given the scientific knowledge we currently have, he said, it is difficult for modern humans to estimate how far comets were once considered sure signs of disaster on the horizon.

He added to BBC Sky At Night: "Even the relatively rare petrological events, such as the emergence of a lunar halo with the possibility of a planet in it, gave rise to urgent and strange sayings."

This is an interesting point, since bright comets often appeared at the same moments when dramatic events that changed the world were taking place.

An example can be found in Julius Caesar, it is widely known that the emperor was murdered in 44 BC. Less well-known is that when his adopted son, Octavian, organized a funeral mass to deify his father, four months after his death, a luminous comet shone in the sky above the Roman Forum.

Trolloff said the best known example is Halley's comet, which "appeared across the sky in 1066 before King Harold was defeated at the Battle of Hastings."

The comet's influence on attendees is immortalized at Bayeux Tapestry, which depicts several gentlemen of Harold's court gazing at the sky, referring to the "hairy star."

Nearly 200 years later, when Pope Urban IV died, another comet appeared across the sky - known today as the Great Comet of 1264. History books say that the Pope fell ill on the day of his appearance, and died on the day of his departure.

"How strange and improbable it was at the time," said Truelove, "that now, after this long absence of bright comets from our sky, it seems that Comet NEOWISE should choose to continue this centuries-old tradition, and be at its best during the months it has spread." "Covid-19" as a pandemic, and it has spread throughout the planet. Perhaps, like the ancients, we should have taken its arrival as a precursor of things to come. "

We have 61 guests and no members online