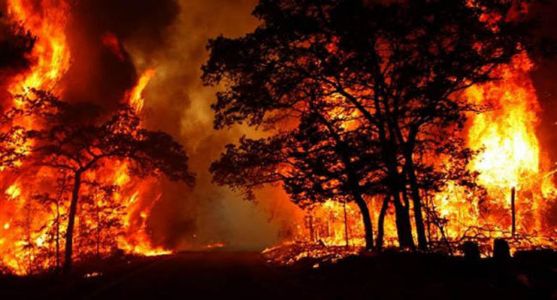 What enabled them to provide insight into the shape of life in the Earth during the Cellular Age, scientists tracking the oldest wildfires ever discovered, thanks to 430 million-year-old coal deposits in Wales and Poland,

The researchers confirm that normal life was not dominated by trees, but by ancient fungi, for which little is known, but which are thought to have been able to grow up to a height of nine metres.

The forest fires discussed in the study were burned by very short plants, as well as occasional plants up to the knee or waist.

For his part, ancient botanist Ian Glasspool says: "It now seems as if our evidence of fire closely matches our evidence of the oldest and largest fossils discovered for Earth's plants."

"Forest fires need plant-based fuel, a source of ignition that could have been lightning strikes, and enough oxygen to burn them," he adds.

The researchers say the fires were capable of spreading and leaving coal deposits, indicating that oxygen levels in the Earth's atmosphere were at least 16 per cent.

This information is very useful for paleontologists, as the thinking is that increasing plant life and photosynthesis could have contributed more to the oxygen cycle around the time of the forest fires being studied, and knowing the details of that oxygen cycle over time gives scientists a better idea of how life develops.

In turn, paleontologist Robert Gastaldo said: "There had to be enough vegetation in normal life in the Silorian era to spread wildfires."

The discovery certainly breaks the previous record for the oldest wildfire recorded by 10 million years and highlights the importance that forest fire research can have in charting the Earth's history.