An Egyptian photographer documenting the death of Scar Vis, the most famous lion in history. 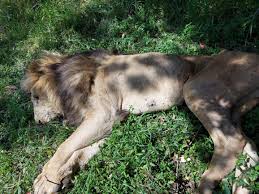 Last Friday, the Masai Mara Nature Reserve in Africa announced the death of the Scar Vis lion, which is the most famous in the reserve, while an Egyptian photographer documented his final moments, revealing interesting information, about one of the most famous lions in history.

On its Facebook page, the Reserve said: "At 1 p.m. local time, Lion Scar Vis uttered his last breath, dying peacefully without the inconvenience of cars or hyenas."

There were many missteps about Scar Vis's death, including his death at night and female crying for long hours. He also kept the head of a black man for two weeks after his death, which Egyptian nature photographer Mustafa si, who was there in the last moments of Assad to document her with his lens, denies.

"I've been living in the reserve for almost four years, and Scar Vis for all of us is part of everyday life whether we see it or not, because it's the months that everyone cares about."

The Egyptian nature photographer tells: "Scar Face is mentioned every day in our life routine, and we've been following his news for a while and we know what's happening to him, because he's fired from the group and he and his two brothers live, but someone died a while ago and he and his brother just stayed."

He adds: "When we learned of his state of health, the veterinary unit went to him to provide any medical support that could be provided, but it was over, and we were continuing to tell him until we learned that he had returned to the same place where he was born hours before his death, a place that was far from his original kingdom."

The Egyptian photographer goes on: "From about 7 a.m., we were standing and monitoring what was happening, at the same time to protect him from hyenas and predators because he was in a vulnerable state, which is easy prey for any animal to swoop on, and he died alone and we still don't know where his brother is."

The Committee notes that: "What is being said about the lion is very exaggerated and imaginative and does not apply to any lion in history, Scar Vis is very special and is named for that name because of the wound in his eye in 2012, along with his injury years later with a dislocation of the back thigh bones."

The nature photographer notes: "Everyone expected Scar not to survive, but he continued to live in wildlife, and he had a real, distinctive prestige, besides his and his brothers' way of hunting which is different and unique, and no one in life can tell how many lions any lion has fought, because following any lion is not for 24 hours."

He explains: "The reserve in which he lived has more than 6 families and every male family in control, even on the scale of physical strength, there are much stronger lions than Scar Vis, so talk of his control over the rule of Kenya and Uganda is exaggerated and irrelevant."

The nature photographer tells Sky News Arabic: "There were many people going through to say goodbye to him and throw him the last peace, because everyone knew him because of his great prestige. It's normal that lions die and we only know a day or two later, but it's with Scar Face that's completely different."

He commends the honour he received after his death: "The Department of the Reserve decided to bury him and honor him, because that is an unusual tradition in the animal world, and they put a tree where he died."

The photographer who documented the last moments of one of the most famous lions: "I live with animals permanently all the time, my time with them more than humans, they have distinct behaviors and they do things we don't expect, and they have high intelligence and characteristics that distinguish them from each other, real, they are another world that is very fun."

"The first rule here is that we live with animals, not the other way around. Animals are entitled to priority all the time. They get used to lifestyle, and it's not creepy, even though the reserve is open, it's not closed, and the animals move completely free."

We have 251 guests and no members online