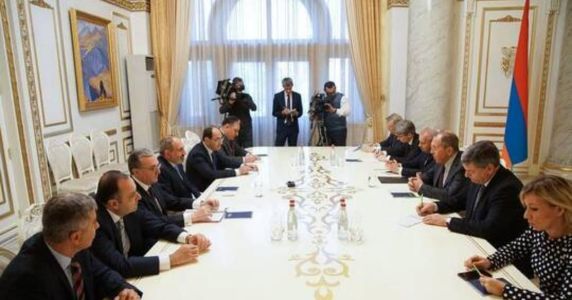 Russian Foreign Ministry explained the reason for the absence of Russian flag during the talks held by the Russian Minister Sergei Lavrov in Yerevan on Saturday, with the Armenian Prime Minister, Nicole Pashinaan.

"The flags are a very important thing. The most important thing is the content of the talks. It is also important to know the history of the meetings and the official procedures that accompany them," the Foreign Ministry said on Telegram. "Each country has its own protocol procedures. Good observers may notice that there is only one flag during meetings that the Minister of Foreign Affairs holds with the prime minister and the head of state," the ministry added.

The ministry attached the news to a photo of talks conducted by Lavrov and Pashinyan in 2019, in which he only sees the Armenian flag.

On the other hand, the Foreign Ministry published a picture of talks that Lavrov held, also today, Saturday, with his Armenian counterpart, Ara Avazyan, in which the Russian and Armenian flags are visible.

We have 349 guests and no members online