Turkish official: criticizes the Brotherhood and describes the handshake between Sisi and Erdogan as a first step towards further normalization 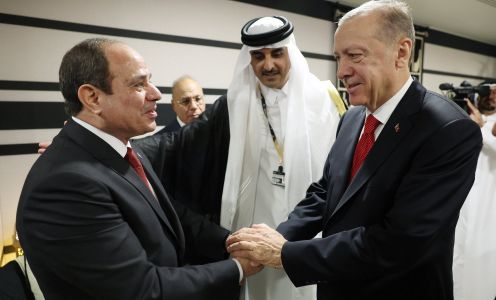 Commenting on the handshake meeting between Egyptian President Abdel Fattah al-Sisi and Turkish President Recep Tayyip Erdogan, on the sidelines of their attendance at

the opening ceremony of the World Cup in Qatar, which analysts considered a step towards "open options" between the two countries, Turkish Deputy Minister of culture and tourism, Sardar jam, criticized the terrorist Brotherhood, saying that it lost its status due to internal divisions and infiltration of terrorist groups, especially ISIS.

The Turkish Deputy Minister of culture and tourism wrote on Twitter that "the Brotherhood has become associated in the minds of a large part of Egyptians with explosive bombs and the killing of innocent people, which caused their hatred of it".

In response to questions about the reasons for the meeting between Sisi and Erdogan, Jam said:there are many reasons for improving relations with Cairo, such as war and peace in the Middle East, the relationship between Palestine and Israel.

Describing the historical proximity to the Egyptian people , the Turkish Deputy Minister of culture and Tourism said the fact that economic and trade relations are still continuing, including in the textile industry, as the best cotton in the world is in Egypt.

In his words, "politics with countries cannot be determined emotionally," and Turkey's proximity to Egypt can contribute more to the establishment of peace and tranquility in the region.

For his part, Erdogan described the handshake that took place between him and the Egyptian president in Qatar on Sunday as a "first step towards further normalization" in relations between the two countries.

In turn, the official spokesman of the Egyptian Presidency, Bassam Radi, said in a statement that the two presidents stressed during their recent meeting the depth of the historical ties connecting the two countries and the Egyptian and Turkish peoples, and that "it was agreed that this would be the beginning of the development of bilateral relations between the two sides".

Although there is an unbridled Turkish desire to complete the negotiations, it should be noted that reaching this point depends on the ability of the Turkish side to achieve the conditions of Cairo.

Here it should be noted that one of the most prominent conditions of Cairo for the normalization of relations with Ankara:

Stop the Turkish intervention in supporting mercenaries and terrorism in Libya and the countries of the region.

Meetings and negotiations at the level of Deputy Foreign Minister between Cairo and Ankara to explore the possibility of normalizing relations began several months ago, interspersed with times when the level of tension increased as a result of the Turkish presence in Libya, and the continuation of the agreement between Ankara and Tripoli on Turkey's oil and gas exploration in the Mediterranean.

We have 157 guests and no members online