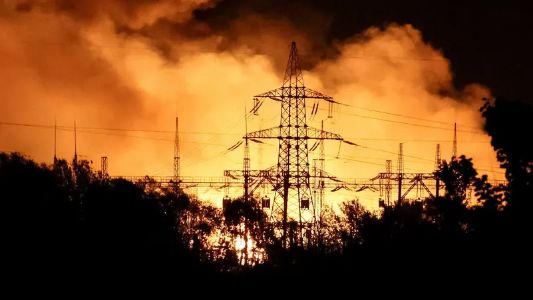 Amid relentless Russian attacks that have halved the capacity of the country's electricity grid , the Ukrainian government urged its citizens to rationalize the use of energy, while the UN World Health Organization warned of a humanitarian disaster in Ukraine this winter.

The authorities said that millions of Ukrainians, including residents of the capital Kiev, may face power outages until at least the end of March due to rocket attacks that caused "enormous" damage, according to the Ukrainian national energy company.

Russia is targeting Ukrainian energy facilities following a series of setbacks on the battlefield, including the withdrawal of Russian troops from the southern city of Kherson to the Eastern Bank of the Dnipro river that runs through the center of the country.

He added that scheduled power outages occur in all regions and it is possible to cut off electricity for emergency conditions in some situations where frost attacks have begun and electricity consumption is rising.

Volodymyr kudretsky, the head of the National Electricity Company, said that practically no power plant remained undamaged, but he denied that there was a need to evacuate civilians.

"We cannot generate the same amount of energy as consumers," kudretsky said in a statement, adding that temperatures are expected to rise again after a short cold snap, which provides an opportunity for the stability of the power generation system.

Ukraine has seen unusually mild temperatures this autumn, but the temperature has started to drop below zero and is expected to reach minus 20 degrees Celsius or even lower in some areas during the winter months.

In a statement after visiting Ukraine, who regional director for Europe Hans Klug said: "the health system in Ukraine is facing its darkest days of the war so far. After more than 700 attacks, it is now a victim of the energy crisis,"he said.

"Stock up on clothes and blankets that provide warmth, think about options that will help you get through a long power outage,"Kovalenko said.

Hundreds of hospitals and healthcare facilities in Ukraine lack fuel, water and electricity to meet the basic needs of people, the World Health Organization said.

Workers are rushing to repair damage to the energy infrastructure, according to Sergey Kovalenko, CEO of yasno, which supplies Kiev with energy.

The Russian TASS news agency quoted Kremlin spokesman Dmitry Peskov as saying that Russian attacks on the energy system are the result of Kiev's unwillingness to negotiate.

Moscow denies deliberately targeting civilians as part of what it calls a "special military operation" to rid Ukraine of nationalists and protect Russian-speaking communities.

We have 93 guests and no members online