Ukrainian offensive with marches on Crimea 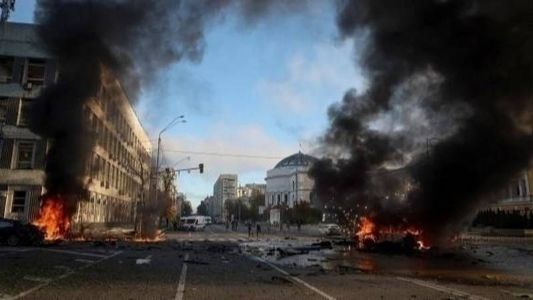 A few days after Moscow announced the strengthening of its positions in the Crimea, the peninsula under Russian control since 2014 today was attacked with parades

This comes while the Russian troops there were "on alert", as announced by the authorities appointed from Moscow

The attack comes as Ukraine declared another regional victory

"There is a marching attack," Mikhail Razvozhaev, governor of the Sevastopol administrative region of Crimea, said on Telegram. Our air defense forces are working at the moment,"he said.

He explained that two marches had been "shot down so far" , stressed that no civilian infrastructure had been damaged and called on residents to "remain calm".

Moscow annexed Crimea in 2014 after nationwide pro-democracy demonstrations led to the overthrow of Ukraine's Kremlin-friendly president.

Russia used the peninsula, home to several important Russian military bases, as a launching pad for its invasion of Ukraine in February.

But in recent months, Ukrainian troops have been conducting a counteroffensive in the south towards the Crimea, and earlier this month they recaptured the city of Kherson, the capital of the region located on the border of the peninsula annexed by the Kremlin.

There have been several explosions at or near Russian military installations in Crimea since February, including a coordinated attack with marches on a major Russian port of Sevastopol in October.

For his part, Ukrainian President Volodymyr Zelensky said that Russia is trying to use the cold this winter as a "weapon of mass destruction" by hitting energy infrastructure.

Ukraine announced on Tuesday that it had almost completely regained control of an isolated peninsula off the Black Sea, while fighting continues there.

"We still have to (retake) three towns on the Kinburn peninsula" to completely liberate the Mykolaiv region, regional governor Vitaly Kim said Tuesday.

It is isolated from the territory controlled by Ukrainian troops by the Dnipro river, which flows through the Kherson region.

Ukrainian Foreign Minister Dmytro kuliba told the EU during an online press conference that the bloc's support was crucial, warning against "exhaustion" from the war.

"If we Ukrainians do not get tired, the rest of Europe will have neither the moral nor the political right to get tired,"he added.