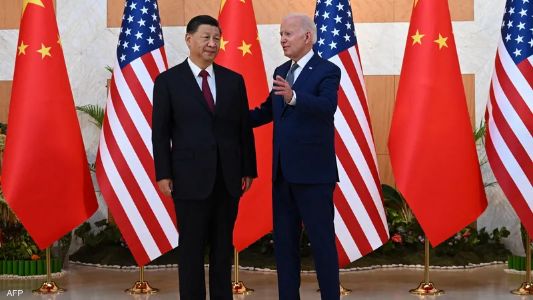 During a meeting between US President Joe Biden and Chinese President Xi Jinping on the sidelines of the group of twenty summit held in Bali, Indonesia, presidents Biden

and Jinping agreed on Monday that "nuclear weapons should never be used," including in Ukraine, while the Chinese President warned against "crossing the red line" regarding Taiwan.

"During the meeting, Biden raised Russia's war against Ukraine and Russia's irresponsible threats of nuclear use,"the White House said in a statement.

"The two presidents reaffirmed their agreement that a nuclear war should never be fought, it can never be won, and stressed their opposition to the use or threat of use of nuclear weapons in Ukraine,"he added.

"The two presidents spoke frankly about their priorities and intentions on a range of issues, and Biden explained that the United States will continue to compete vigorously with China, stressing that this competition should not turn into a conflict, and that America and China should manage it responsibly and maintain open lines of communication,"the White House said.

The US president also stressed that his country and China should " work together to address cross-border challenges, such as climate change, global macroeconomic stability, including debt relief, health security and global food security, because this is what the international community expects from the United States and China."

For his part, the Chinese President warned his US counterpart not to "cross the red line" with Beijing over the island of Taiwan.

"The Taiwan issue is at the core of China's core interests, the base for the political foundation of Sino-US relations, and the first red line that should not be crossed in Sino-US relations,"Xinhua news agency quoted Xi as telling Biden.

As for Biden, regarding Taiwan, he said: "the one-China policy has not changed, and the United States opposes any unilateral changes to the status quo by either side. The world has an interest in maintaining peace and stability in the Taiwan Strait," the statement said.

"He also raised the objections of the United States to the increasingly coercive and aggressive measures taken by China towards Taiwan, which undermine peace and stability across the Taiwan Strait, and endanger global prosperity," he said.

At a press conference after the meeting, Biden said: "I don't think there is a Chinese intention to invade Taiwan.. The commitment of the United States to the one-China policy has not changed, and we are committed in return to the defense of Taiwan,"he said.

Biden stressed during the conference, "the unwillingness of the United States to turn competition with China into a conflict between the two countries," stressing that "there will be no new Cold War with China".

In conclusion, the two presidents agreed that US Secretary of State Antony Blinken will visit China to continue their discussions on "common issues".