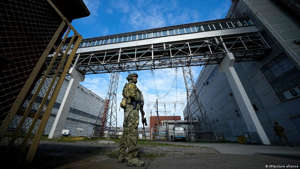 Amid the exchange of accusations between Moscow and Kyiv about endangering Ukraine's Zaporeggia nuclear plant and the region by bombing areas close to it, Officials at the

International Atomic Energy Agency (IAEA) said the plant had lost contact with the last major external power line, explaining that it now operates with only a backup line. This exacerbates the anxiety associated with the possible consequences that can result from damage, Adding that only one of the station's six reactors is still operational

The station controlled by Russian forces shortly after Ukraine's invasion in late February became one of the focal points of the conflict, with each side blaming each other for shelling areas close to it.

Meanwhile, the standoff over Russian gas and oil exports continued this week, with Moscow pledging to keep the main pipeline transporting its gas supply to Germany closed, and the G7 countries announcing a planned cap on Russian oil export prices, coming as Europe prepares for a cold winter.

In his speech Saturday, Ukrainian President Volodymyr Zelenskiy spoke of the continued closure of the Nord Stream 1 pipeline and said that "Russia is preparing to deal a blow to all Europeans this winter."

Zelensky earlier blamed Russia's bombing for the previous power outage at the nuclear plant and said that radiation leaks had been narrowly averted.

Moscow attributed the interruption of gas supplies to Western sanctions and technical issues, while European countries accused Russia of using supplies as a weapon of war.

Meanwhile, the confrontation over Russia's gas and oil exports continues, with Moscow deciding to keep the main pipeline transporting its gas supply to Germany closed.

We have 255 guests and no members online