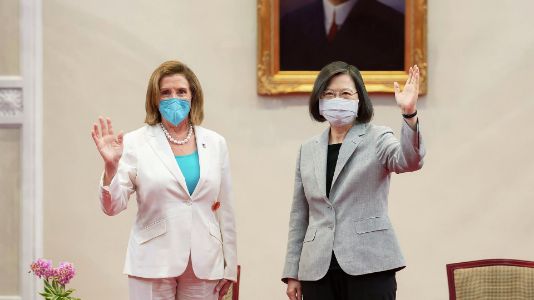 Speaker Nancy Pelosi of the United States House of Representatives visited Taiwan on Tuesday, in a move that fueled Chinese anger, to the extent that the Chinese military announced a series of military exercises including long-range live fire in the Taiwan Strait

Observers see Pelosi's visit to Taiwan It came within Washington's policy of "pouring oil on fire" with Beijing, to achieve several strategic goals '

In all respects, the Chinese army has cordoned off the island, imposing economic sanctions on Taiwan, suspending the import of some goods and exporting natural sand.

China's response to the visit came as Foreign Minister Wang Yi said on Wednesday: "This conduct seriously contravenes the principle of one China, maliciously infringes on China's sovereignty and represents a blatant political provocation, which has deeply dismayed the Chinese people and public opposition in the international community. This proves once again that some American politicians have become problem makers in Sino-American relations, and that the United States has become the greatest underminer of regional peace in the Taiwan Strait region. "

"The United States should not fancy being able to obstruct the unification of China. Taiwan is part of China. China's full unification is a general trend and a historic necessity. We will leave no room for separatist "Taiwan independence" forces and external power interventions. "

On Tuesday, China's Foreign Affairs announced the summoning of its U.S. ambassador and handed him a note of protest against the backdrop of U.S. House Speaker Nancy Pelosi's visit to Taiwan.