The situation in Nagorny Karabakh is reigniting 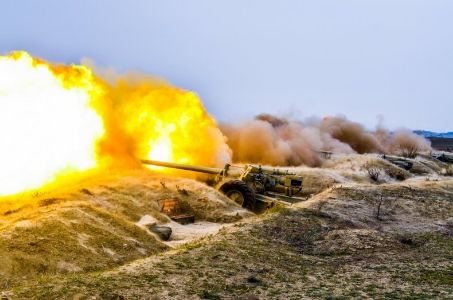 The situation in Nagorny Karabakh was reignited after the press office of the Ministry of Defence of Azerbaijan announced on Wednesday that the Azerbaijani armed forces had taken control of some heights in the territory of Nagorny Karabakh, in response to the Armenian forces' acts of sabotage against Azerbaijani units.

In a statement, the Azerbaijani army said that it had launched an operation called "retaliation" in response to "illegal terrorist movements of Armenian armed groups in the territory of Azerbaijan".

"On Wednesday morning, heavy fire targeted positions of the Azerbaijani Army in Lachin, a buffer zone between the Armenian border and Nagorny Karabakh."

Local reports indicate that an Azerbaijani recruiter was killed following a "heavy shooting" targeting an Azerbaijani army position in Lachin, along with the killing of two Armenian forces and the wounding of 14 in an airstrike from an Azerbaijani march.

For its part, Armenia called on the international community to stop Azerbaijan's "aggressive" actions in the Nagorny Karabakh enclave.

In a statement, the Armenian Ministry of Foreign Affairs stated: "Yerevan calls on the international community to take measures to stop the conduct and acts of aggression of Azerbaijan and to activate mechanisms to achieve this."

Russia also commented on the new developments by saying that it was working to "stabilize" the situation there.

In a statement, the Russian Ministry of Defence announced: "In the Saribaba region, the Azerbaijani armed forces violated the ceasefire", adding that "the leadership of the Russian peacekeeping force is taking steps with representatives of Azerbaijan and Armenia to achieve stability."

The European Union called for an "immediate cessation" of fighting between Azerbaijani and Armenian forces in Nagorny Karabakh.

EU Foreign Minister Josep Borrell's spokesman said in a statement: "It is essential to reduce the escalation and fully respect the ceasefire and return to the negotiating table to seek negotiated solutions."

With the European Union's mediation, the two States have been negotiating a peace treaty for months.