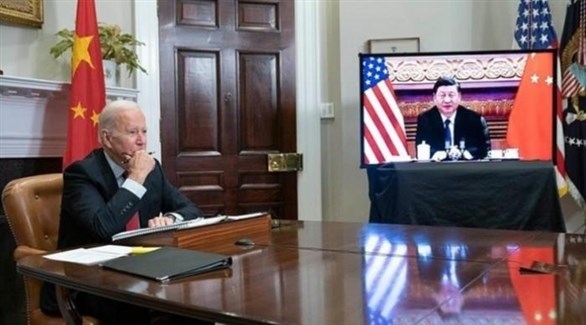 dispute between the two countries and their attempt to keep the rivalry between the super powers under control. Amid heightened concerns about a possible visit by Speaker of the United States House of Representatives, Nancy Pelosi, to Taiwan. Chinese President Xi Jinping warned US counterpart Joe Biden not to "play with fire" on Taiwan

During a video call with Biden on Thursday, the Chinese president announced that his country was strongly protesting foreign interference in the Taiwan issue, stating that "whoever plays with fire is burning with it."

Chinese state television quoted the Chinese president as saying: "We strongly protest separatism and" Taiwan independence ", as well as the intervention of external forces."

The Chinese President stressed that the will of the Chinese people, with a population of more than 1.4 billion, to protect State sovereignty and China's territorial integrity was "unwavering".

For his part, US President Joe Biden assured his Chinese counterpart, Xi Jinping, during their conversation that America remained committed to a "one China" policy and did not support Taiwan's independence.

The Chinese president, for his part, warned during a call with Biden about the gravity of designating the United States as a strategic competitor, stressing that it would be "a mistake in calculations about Sino-U.S. relations and a misunderstanding of China's development, which would mislead the peoples of both countries and the international community."

Nancy Pelosi is preparing to visit the United States-backed island of Taiwan, which China claims as an integral part of its territory, after a number of American delegations recently visited.