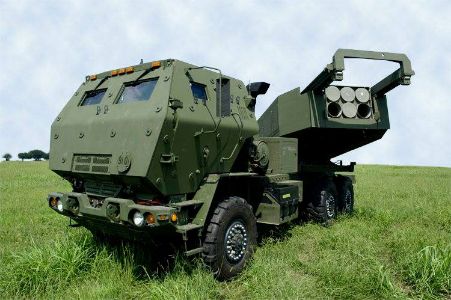 With a new package of U.S. military aid to Ukraine since the start of the war on February 24 rises to $4.6 billion, announcing the arrival in Ukraine of new U.S. weapons, the

Hemars missile launchers, to bolster the military arsenal in the face of the Russian invasion, in a tweet in which Ukrainian Defense Minister Oleksiy Reznikov wrote: "The Himars arrived in Ukraine ars. Thank you to my colleague and friend Lloyd Austin (his counterpart to the United States Secretary of Defense) for these powerful tools ", attaching his message to a picture  of the Hemars mobile missile launcher system on light armoured vehicles.

US Deputy Secretary of Defense Colin Kall said Ukrainian troops needed about three weeks of training to use the Hemars Rajim.

Hamars is a rocket launcher mounted on light armoured vehicles and fired targeted and precise rockets. The acquisition of this weapon by the Ukrainians would provide them with distance and precision at the Donbass battle.

Kal added to reporters that the Hemars rockets, each of which detonate each time with six missiles with a range of up to 70 km, twice the range of American howitzer shells that have already entered the battlefield, "will provide Ukraine with more precision in targeting from afar."

We have 232 guests and no members online