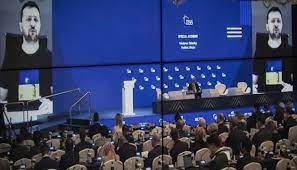 During his participation in the Asia Summit events, known as the "Changerlaya Dialogue" Held in Singapore a few days ago, a newspaper specializing in weapons and military

materiel highlighted some of the details of a speech delivered by Ukrainian President Vladimir Zelenisky in which he invited the Ukrainian President to address participants at a summit "Shangri-La Dialogue", to greater international engagement in the Taiwan Strait to support Taipei government in Taiwan against China, citing signs of possible military action in the South China Sea.

"We must not leave them (the government of Taipei) at the mercy of another country (China) stronger financially, regionally and in terms of equipment," Zelensky said.

According to Meltary Watch magazine, this speech may have a negative impact, especially since Beijing took a neutral stance, stating in its article:

"Although China has taken a neutral position in the Russian-Ukrainian war... However, Zelensky's apparently unjustified call to action against Beijing has the potential to accelerate the deterioration of relations. "

The article explained that the calls of the "former comedian" were immediately echoed by NATO leaders during the summit, causing China's defence minister to respond to those calls.

"The United States has long refrained from selling large arms to Taiwan, under both the George Bush and Barack Obama administrations, but Donald Trump's administration has largely stepped up sales" as part of a broader policy of moving towards a greater confrontation with Beijing, "the article noted.

"Let me make a point: if anyone dares to separate Taiwan from China, we will not hesitate to fight. We'll fight at all costs. We'll fight until the end. This is the only option for China ".

The Chinese minister stressed the need for "eventual peaceful reunification", adding that the split was the result of the Chinese civil war, which technically continues between the two rival Chinese governments.

The Journal considered that, with the presence of figures in Taiwan's ruling party, especially after the Democratic Progressive Party (DPP) indicated that the official secession from China and the declaration of the "Republic of Taiwan" could be under consideration, which would certainly justify military intervention by Beijing, considering that "the moves of Western powers to strengthen their forces in Taiwan are seen as a possible preparation".

We have 263 guests and no members online