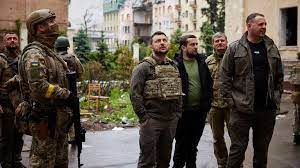 For the first time since the start of the Russian military offensive, Ukrainian President Volodymyr Zelensky went to the east of the country, where he visited the Kharkiv region from which Moscow had withdrawn troops in recent weeks to be redeployed on other fronts.

"2229 Destroyed houses in Kharkiv and in the area. We will restore and rebuild and bring to life Kharkiv and all other towns and villages where evil came from, "Zelensky wrote in a post accompanying a video about his visit, via the" Telegram "app:

Accompanied by aides and armed soldiers, the Ukrainian President appears in the scenes as he inspects the destruction and the cars smashed on the side of a road, dressed in khaki and a bulletproof vest.

Zelensky added: "In this war, the occupiers are trying to get a result whatever it is. But they must have realized a long time ago that we defend our land until the end. They won't have any chance. We will fight and we will win ".

With the withdrawal of the Russian army to other positions in the east and south, Kharkiv, the country's second city to be bombed almost daily since the start of the Russian military operation on 24 February, has been calm for several weeks.