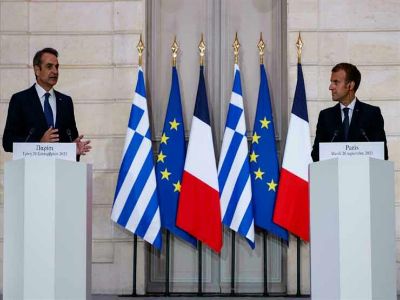 Noting that "Greece will get 3 new frigates from France and Rafale fighters," French President Emmanuel Macron declared that "France and Greece have signed a strategic partnership agreement."

In a joint press conference with the Greek Prime Minister, Kyriakos Mitsotakis, Emmanuel Macron said that this "agreement will strengthen the sovereignty of the two countries," as Greece signed an agreement with France to purchase three new frigates with the option of purchasing a fourth frigate.

Macron also stressed that "Australia's decision to cancel the French nuclear submarine deal will not change the strategy of Paris in the Indian and Pacific Oceans," noting that "the cancellation of the deal will have a relatively limited impact on France for a few hundred jobs."

It should be noted that earlier this month Australia had cancelled its request for a fleet of conventional submarines from France, indicating that it would instead build at least eight nuclear-powered submarines using American and British technology under the New Security Partnership "AUKUS."

We have 239 guests and no members online