The Okus Alliance is a perceived tremor in Western relations and deep Asian resentment. 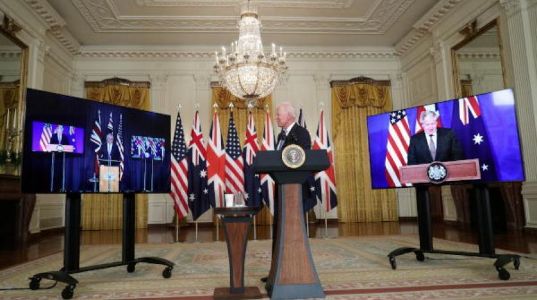 After the announcement by the United States, Britain and Australia that the Security and Defence Partnership for the Security of the Pacific and Indian Oceans (PAICUS) had been established, it was met with negative actions by several parties that did not abate the new coalition.

French Foreign Minister Jean-Yves Le Drian described Australia's decision as a "real back stab." He added: "We have a relationship of trust with Australia, this trust has been betrayed."

The European Union announced that it had not been informed about the new security alliance involving the United States of America, Britain and Australia, and its foreign policy spokesman Peter Stano said that he was in contact with partners to learn more about the alliance.

Josep Burrell, the EU foreign policy officer, said he understood why France was disappointed with the Convention, adding that the EU had not been consulted on the new coalition.

"This leads us once again to think about the need to make European strategic independence a priority, and this shows that we must live alone," said Burrell.

It should be noted that from the very first moment on China, the Great Western step was mainly directed against it by the announcement of the Okus Alliance, as the Pacific and Indian Oceans were China's most important and broader sphere of influence beyond its borders, and China described the Okus Alliance as "irresponsible" and "narrow-minded." The Chinese Foreign Ministry spokesman, Chao Lijian, said the coalition risked "causing serious damage to regional peace and intensifying the arms race," and criticized Lijian for what he described as an "outdated cold war mentality," warning that the three States were "harming their interests."

We have 265 guests and no members online