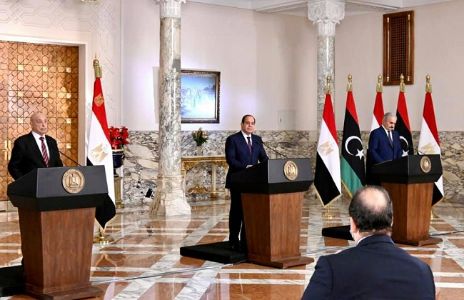 In a statement, Egyptian presidential spokesman Bassam Radhi said that the meeting had been attended by the head of the Egyptian General Intelligence Service, Abbas Kamel.

The meeting discussed the latest developments on the Libyan scene in the light of Egypt's distinctive relations with Libya and the well-established Egyptian policy of considering Libya's political and security stability as part of Egypt's stability.

Sisi welcomed the Libyan leaders, as well as their constant concern to enforce the will of the Libyan people and to safeguard their national interests, with a view to restoring security and stability in Libya and maintaining the sovereignty and unity of the Libyan State.

He also stressed Egypt's continued efforts to coordinate with all Libyan brothers in the coming period, in order to ensure the unity and cohesion of Libyan national institutions in order to achieve the important parliamentary and presidential electoral entitlement expected by the end of the current year, as well as to prevent external interventions aimed primarily at implementing its own agenda at the expense of the Libyan people, as well as the removal of all foreign forces and mercenaries from Libyan territory.

For their part, Haftar and Adaa have expressed their great appreciation for Egypt's leading role and for its tireless and sincere efforts to support and support its brothers in Libya from the outbreak of the crisis to the present, within the framework of the extended and fraternal relations between the two countries and the two peoples.

They also expressed their deep appreciation to the President and the Egyptian people for joining their Libyan brothers in managing the transition and for supporting them in their historical responsibilities, in particular by contributing to the unification of the Libyan National Army, as well as for the vital role of transferring Egyptian development experience to Libya and taking advantage of the experience and potential of ancient Egyptian companies in this regard.

It should be noted that the timing of that visit came two days before the joint Libyan-Egyptian High Committee was held in Cairo next Thursday, with the participation of the head of the Government of National Unity, Abdulhamid Al-Dabiba.