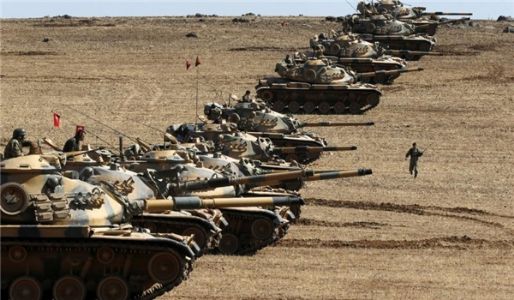 Democratic Forces (SDF) and Turkish occupation zones since the end of the "Peace Springs" invasion about two years ago, resulting in two deaths (one child and one woman) and about 20 injuries, according to health sources in the region.

Clashes, intermittent skirmishes, occasional Turkish bombardments and, as observers say, cautious and relative calm were often on the scene.

However, the Turkish Forces have increased their frequency of artillery bombardment in some of those areas in the past few days, particularly on Tuesday night, where the town of Abu Rasin Prif Ras al-Ain was widely and violently attacked by heavy artillery and rocket bombardment in the late evening hours, from the gunners and rangers of the Turkish Army and its cooperating Syrian factions, where, according to health sources in the area, (child and woman) and about 20 wounded.

Political analyst Jamal Aziz says: "It is quite clear that this violent attack, which targeted the civilian neighborhoods of a small, secure town, is a Turkish message for the Washington Pulse in areas east of the Euphrates where American troops are present, and it is not, of course, a coincidence that this attack took place soon after the Taliban took control of Afghanistan, with the American withdrawal from it."

He continues: "Turkey is now clearly betting on a similar American withdrawal from northern and eastern Syria, so that it can single out and expand its areas of occupation to all the northern regions of Syria, as Ankara aspires, and is also seeking to create further confusion, fear and confusion in those areas, whose population is concerned about an American withdrawal, in preparation for the invasion of them by the Turkish army and its Syrian mercenaries, as has happened.

We have 566 guests and no members online