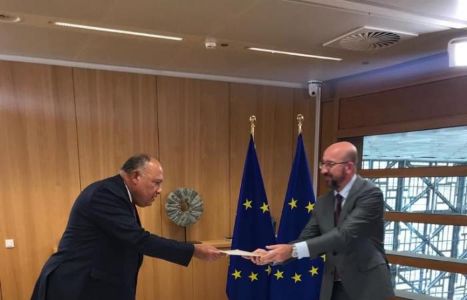 My thanks went to Michel for a message from Egyptian President Abdel Fattah al-Sisi on bilateral relations and regional issues, first and foremost the issue of the Nahda dam, Libya and peace in the Middle East.

My thanks go to other meetings in Brussels, most notably with NATO Secretary-General Jens Stoltenberg.

The Egyptian Minister for Foreign Affairs reiterated his country's commitment to supporting international efforts to combat terrorism and extremist thinking.

The Egyptian Foreign Ministry said that the meeting "addressed ways to operationalize and develop existing cooperation and partnership programmes between the two sides, and to strengthen cooperation in, inter alia, cybersecurity, counter-terrorism, illegal migration, detection and demining, as well as to build human and technological capacity to meet current challenges."

"The talks also addressed various security challenges throughout the region, particularly in the Eastern Mediterranean and North Africa, as well as in the Sahelo-Saharan region and the Horn of Africa."

My thanks go to "Egypt's position with regard to the crises facing a number of countries in the region, Egyptian efforts to combat terrorism and Egypt's comprehensive approach in this regard."