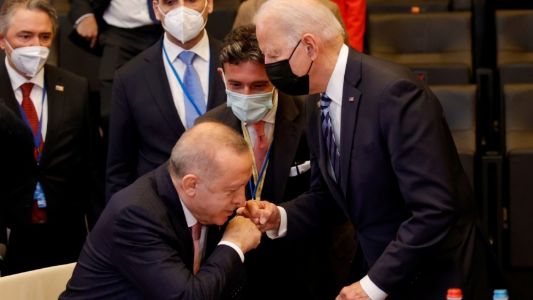 It evoked a picture reported by many media outlets showing the proximity of Turkish President Recep Tayyip Erdogan's mouth to the hands of U.S. President Joe Biden, with "Kiss Hand" commenting.

What was really controversial was that this meeting between Biden and Erdogan took place after the United States recognized the Armenian genocide, which angered Erdogan.

The real video shows that the Turkish president was sitting down, before his American counterpart came in with a muzzle and held his hand for a healthy peace without a handshake in the wake of a Virus Corona infection, and as Erdogan approached his mouth with Biden's hand. The photo was taken by photojournalists and posted as a hand kiss, some considering it a media recklessness away from the original source culture.

The Turkish President had a friendly conversation with President Biden at the NATO summit, according to the Director of Public Relations of the Turkish presidency on Twitter.

According to him: The leaders will meet again soon to discuss bilateral and regional issues.

We have 195 guests and no members online