Washington: The Vienna talks are positive, but there's still a "long way to go," Iran warns. 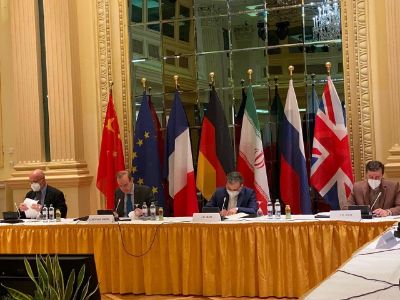 The United States declared Iran's talks in Vienna "positive," but noted that there was still a long way to go, while Iran said it saw the talks moving forward, but warned of what it called "irrational demands."

Price added that US Envoy Rob Mali is "exploring concrete approaches to steps that Iran and the United States should take to return to compliance with the 2015 agreement."

For his part, Iranian chief nuclear negotiator Abbas Iraqi said Tuesday that talks to salvage the nuclear agreement were "progressing despite difficulties," but warned that Tehran would cease negotiations if it faced "illogical or time-consuming demands."

The media attributed to Iraqi: "The Iranian delegation will cease negotiations as they move towards additional demands, waste time and illogical bargaining."

He added to official television: "It is too early to judge the outcome or to say that we are optimistic or pessimistic, but we believe that we are on the right track."

At the same level, a senior European Union official said that Iran and the major Powers had "made progress" in the Vienna talks, although much "overtime" was needed as meetings resumed next week, after consultations with delegations in their capitals.

However, the Director of Political Affairs of the European Union tweeted: "Much work needs to be done in Iran's nuclear talks, despite progress over two weeks."