Bashnyan: The presence of Russian peacekeepers in Qarah Bagh has become a key factor for stability and security in the region. 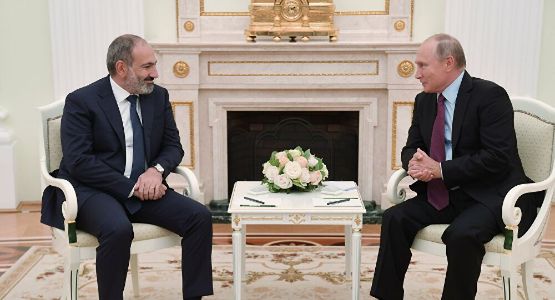 "The presence of Russian peacekeepers in the region of Qarah Bagh is a factor of stability and security in the region," Armenian Prime Minister Nikol Pashinyan said today Wednesday, during his meeting with Russian President Vladimir Putin.

Pashinyan added: "In this context, I hope today to discuss with you your perspective on the structure of the security system in our region, in and around Qarah Bagh, and in Armenia and the region in general." "He will raise the issue of building a new nuclear power plant in Armenia with Moscow's participation."

This visit, after Russian President Vladimir Putin invited Armenian Prime Minister Nikol Pashinyan to Moscow, to discuss issues of cooperation between the two countries at a working lunch, including the restoration of trade and economic relations and transport routes.

Armenia and Azerbaijan have signed a Russian-sponsored ceasefire agreement in Nagorny Qarah Bagh, which entered into force on 10 November 2020.

The Kremlin declared that "Russian President Vladimir Putin, his Azerbaijani counterpart Ilham Alev and Armenian Prime Minister Nikol Pashinyan have signed a joint declaration on a comprehensive ceasefire in Qarah Bagh and is overseen by Russian peacekeeping forces."

The agreement also included the lifting of restrictions on movement and transit, the exchange of prisoners between the parties to the conflict and the return of displaced persons to Qara Bagh under the auspices of the United Nations Commissioner for Refugees.

We have 127 guests and no members online