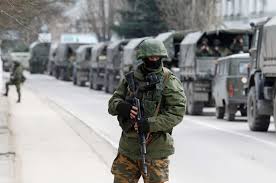 The U.S. State Department said the U.S. asked Moscow to explain "provocations" on the border with Ukraine, amid reports of a large Russian military build - up.

In a press briefing, United States State Department spokesman Ned Price said that the United States would be concerned about any effort by Moscow to intimidate Ukraine, whether on Russian territory or inside Ukraine.

Price added: "We asked Russia for an explanation of these provocations. But more importantly, what we have indicated with our Ukrainian partners is a reassuring message. "

After pressing whether the United States regarded troop movements on the Russian side of the border as intimidating to Ukraine, Price replied: "Of course, the Russians have for some time sought to intimidate and harass their neighbours."

Price's remarks followed a phone call on Friday, during which US President Joe Biden assured his Ukrainian counterpart, Volodymyr Zelensky, of "firm support" in Ukraine's confrontation with Russian - backed separatists in the east of the country.

Russia denied that Russian military movements posed a threat to Ukraine, and rejected fears of a military build-up even as it warned that it would respond to Ukraine's new sanctions against Russian companies.