Egyptian Foreign Affairs: The Kinshasa negotiations are one last opportunity that the three States must take. 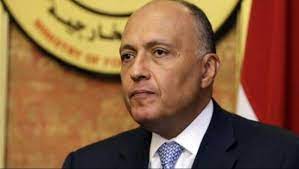 Sameh Shoukry, stressed that Egypt had negotiated for 10 years, with genuine political will, to reach an agreement that would achieve Ethiopia's development objectives while preserving the rights and interests of my country.

The meetings of the parties to the three Nahda Dam negotiations, the Sudan, Ethiopia and Egypt, were launched in Kinshasa, the capital of the Democratic Republic of the Congo, the current Chairman of the African Union.

The negotiations began with meetings of the functional commissions and with direct meetings between the Ministers for Foreign Affairs and for Irrigation, amidst expectations that Tuesday will be concluded with a summit of the three heads of State if progress is made at the technical and ministerial levels.

My thanks also stress the need for the Kinshasa meetings to launch a new, effective and serious round of negotiations that Egypt's international partners are attending to ensure their success. These negotiations represent a final opportunity for the three States to reach agreement on the filling and operation of the renaissance dam in the coming months and before the next flood season.

The Egyptian Minister for Foreign Affairs also expressed Egypt's determination to ensure the success of those negotiations and to work towards overcoming all the controversial points that had hampered the previous rounds of negotiations.