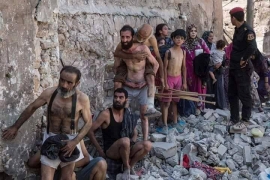 With this wonderful and inspirational slogan of all the peoples who live in terror and sectarian wars, the Iraqis launched with their celebration with the great victory over terrorism.

Mosul finally liberated after all this suffering and misery from the displacement of about half a million Iraqis, the elimination of entire Christian families, the attacks on Shi'a, Sunni and Kurdish citizens, and public massacres that are unbelievable. Finally, the liberation of Mosul was announced by the brave Iraqi army that spent On the Islamic state group  in one of the most important stronghold has dominated for them years ago in Iraq.

The true Victory has achieved which caused the joy for the Iraqis in all their spectrum ,that it achieved the principles of their united that precedes sectarianism in the war of liberation.

But soon after 2 days only on the historical victory on terrorism, the images of the heinous controversial scenes coming up to Media and with it new fears  coming up to Mosul, Iraq, these images spread through social networking sites pushed  the human rights watch (HRW) strongly to condemn the intervention of the popular crowd against the citizens of Mosul belonging to the Sunni sect and assault them and Recruiting media to promote the wrong things and counter any attempt to save these people under the pretense that they belong to a ISIL or there is doubt about them.

The issue has not ended, but escalated in the last hours of genuine fears first of the validity of these allegations and that there is a kind of dominance of the popular crowd instinct and therefore the Iranian hegemony over Mosul as promoted and there are other concerns that the sectarian conflict could rise again under the displacement To citizens who live in camps and hope to return, as well as safety and security of their lives.

The sad scene shows that the Sunni community, which has not mercilessly had a sympathetic hand in the terrorism group of Daash, now has to suffer from the popular crowd.

We do not say that the popular crowd is a terrorist, like Daash, but its intervention raises fears, especially with the aggression of its soldiers against Sunni citizens, according to human rights organizations

This is a danger to the victory that has been achieved. Mosul is a big city, its citizens are Sunnis, Shiites and others. It is not the fault of the Sunnis to pay a bill twice because of the terrorism, but the culprit and those who committed terrorist crimes against his country must be punished and tried fairly. We do not allow anger and revenge to abuse of innocent people or see human massacres as the terrorist group have done before.

The question here which we share , why did the Iraqi authorities allow the intervention of the popular armed crowd?

And why did not the Iraqi army prevent the advance and aggression of the crowd against these unarmed citizens?

Finally, where is the state of law from Mosul, which governs the humanitarian situation and preserves the rights of people and prevents the emergence of terrorist operations against the Sunni and Shiite communities together

If Mosul is a successful model of liberation, can the other Iraqi cities be liberated easily, but after these brutal aggression by the popular crowd,it could to undermine the resolve of the Iraqi citizen who does not know who is their enemy or who is their brother?

And finally if these allegations were untrue, Why aren't seen a clear position from the popular crowd with their Sunni brothers and their solidarity with Mosul to defuse any allegations that harm the Iraqi army and the most dangerous ,it can take the country again into civil wars instead their war against terrorism .

Actually,The officials must  respond strongly to every claim and interfere  to achieve security for the Iraqi citizen, who deserves safe life!