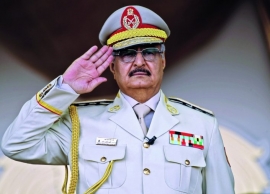 It seems that the conflict In Libya will end soon .And that the leader of the Libyan National Army, Khalifa  Hafter, has taken a green light in clearing the capital Tripoli from criminal gangs and crushing the terrorist militias that control the situation in the capital.

Fayez al-Sarraj, president of the Libyan Presidential Council, does not seem to control the situation in Tripoli. Rather, it is the brotherly and terrorist militias supported and financed by the Turkey-Qatar axis.

So when the war was declared against the army, These gangs and militias that effectively control power in the Libyan west, especially in Tripoli; Faye's Al- Sarajevo left behind Hafter to deal with them ,as there seems to be a secret agreement between Hafter and Al-Sarraj when they finally met in Abu Dhabi.

The deal is in my opinion that the army is to trim the nails of these terrorist gangs and get them out of the capital, according to the deal in Al-Wefaq treatment on 15 of April as promised by  UN envoy Ghassan Salameh. In my estimation, the Secretary-General of the United Nations, who recently visited Libya, implicitly agreed that the army would carry out the task of cleansing Tripoli of the armed militias, provided that the Field Marshal obeyed the rules of engagement, he said in his statement as he left Libya.

The rapid progress of the Libyan National Army forces and the popular welcome received by the battalions of this army in the Libyan south of the population make it more likely that the papers in the hands of Marshal Hafter, both military and political, especially the international and regional ones, are stronger and with much of the paper in the hands of the militias. Which has shown that the army will be (likely) balance of interactions in the course of the situation on the Libyan arena, and it is also clear that things are going to repeat the experience of Egypt after the Muslim Brotherhood left it . So in Libya after cleansing the capital and the rest of the cities of the west of the Libyan armed militias, There, he will resign from the army leadership, enter a candidate in the elections, and because he (the hero), who has saved Libya from the wrangling of more than eight years, will be the first candidate to win, becoming the first president of the Democratic Republic of Libya.

Fayez Al-Sarraj will be the most powerful competitor of HAfter , but he certainly does not have the popularity of The Marshal . In addition, he failed to get Libya out of its crisis after the Skhirat Conference in Morocco. I do not think he will be a real candidate for Hafter.

Turkey and the State of Qatar seem to be emerging from the conflict they launched at first, without any political or economic gains, just as they lost in Egypt. In addition, Turkey today is not the swollen Turkey of yesterday, And he is now facing from within his party a sharp criticism of his regional interventions and his struggles on more than one front. Among these criticisms is his struggle with the State of Qatar in Libya; therefore, Erdogan is unlikely to show any real resistance to stabilizing his feet there. Worth it without a Turkish ally.

We have 246 guests and no members online