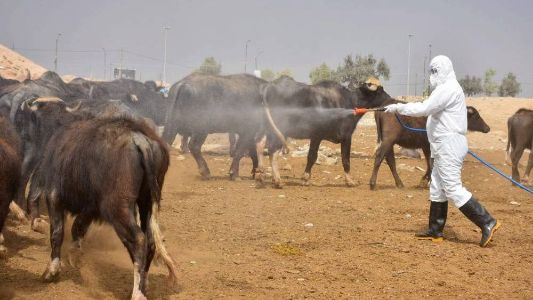 Ministry of Health spokesman Saif al-Badr denied statements made on the local Sumerian News channel that the haemorrhagic fever virus could be transmitted from birds and poultry to humans.

This comes after Iraq's Ministry of Health announced on Saturday that the number of haemorrhagic fever infections had risen to 189, including 32 deaths this year.

Al-Badr noted in this regard that "in Iraq, only livestock have so far been shown to be a vector of the disease".

On Tuesday, Iraqi health reported 170 haemorrhagic fever cases since the beginning of this year, including 31 deaths.

Iraq's first case of the virus died in June 2021. WHO states that haemorrhagic fever is transmitted from one person to another "as a result of direct contact with the infected person's blood, secretions, organs or other bodily fluids".

Haemorrhagic fever is a virus that causes death by between 10 and 40% of infections and is a life-threatening infectious disease. It can cause damage to the walls of small blood vessels, resulting in bleeding with the potential to hinder the blood's ability to clot.

We have 205 guests and no members online