Von der Leyen to Britain: Trust is good, but the law is better, and we will not waste our single market 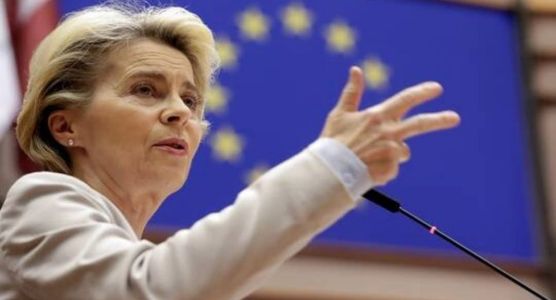 European Commission President Ursula von der Leyen confirmed on Wednesday that a possible post-"Brexit" trade agreement between the European Union and Britain should not affect "the integration of the single market."

"We will do everything in our power to reach an agreement. We are ready to demonstrate good innovation ... but we are not ready to undermine the integrity of our single market," especially the respect of its environmental, social and financial standards or government aid, she told European representatives at a time when negotiations are in their final stage.

Von der Leyen stressed the need to put in place mechanisms in the future agreement in the event that the European Union or Britain deviated with time from the agreed common standards.

Brussels calls for a mechanism that allows it to take immediate and unilateral countermeasures in the event of a sudden change of standards on the part of one of the parties to avoid any unfair competition, which the United Kingdom rejects.

Von der Leyen stated that these guarantees related to fair competition are one of the three points that impede the negotiations, in addition to the issue of European access to British waters and the governance of the future agreement.

On the issue of fishing, which is a source of tension for a number of member states, including France, von der Leyen said, "No one doubts the sovereignty of the United Kingdom over its own waters, but we demand the possibility of setting expectations and guarantees for fishermen who have sailed for decades" in the region.

She emphasized that "These are crucial days for negotiations with the United Kingdom. But frankly, I cannot tell you today whether there will be an agreement in the end."

She added that the only certainty is that "there will be a clear difference between being a full member of the union and simply being an important partner."

There are still less than forty days left before December 31, the end date of the post-Brexit transition. After this date, Britain, which left the Union on January 31, will stop applying European standards.

Without concluding a trade treaty that regulates their relationship, London and Brussels face the risk of a new economic shock, added to that resulting from the outbreak of the Corona virus.

We have 126 guests and no members online