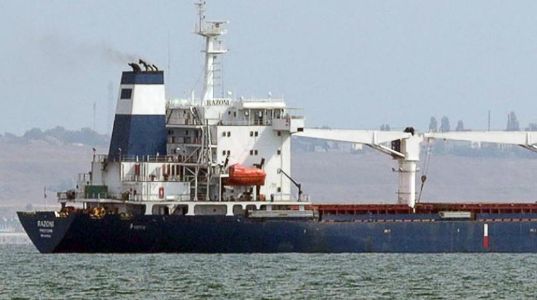 In a gesture to begin the release of the global food crisis, launched on Monday morning, the first Ukrainian grain shipment from the port of Odessa in Ukraine, In the first deal

within the agreement signed in Istanbul on 22 July between representatives of Russia and Ukraine as well as Turkey and the United Nations, The export of grain from Ukraine's Black Sea ports is permitted, as confirmed by Ukrainian Minister of Infrastructure Oleksandr Kubrakov.

Ukrainian Infrastructure Minister Oleksandr Kubrakov said the first Ukrainian shipment of pills left the port of Odessa in Ukraine early Monday morning towards the port of Tripoli in Lebanon. The agreement allowing the export of Ukrainian grain, located in Istanbul, aims to alleviate the global food crisis, which has led to rising rocket prices in some of the world's poorest countries.

For its part, the Turkish Ministry of Defence explained that "the Razzoni left the port of Odessa towards the port of Tripoli in Lebanon. It is expected to arrive in Istanbul on 2 August. It will continue its way to its destination following inspections in Istanbul. "

Ukrainian presidential officials said there were 17 vessels docked in Ukraine's Black Sea ports with nearly 600 thousand tons of cargo on board.

They added that one of them was 16 vessels carrying Ukrainian pills with a total load of about 580 thousand tons. Ukraine's shipments by sea have been halted since February, leading to higher global prices of cereals, food oils, fuel and fertilizer.

The Joint Coordination Centre in charge of overseeing Ukrainian grain exports through the Black Sea was inaugurated Wednesday in Istanbul under the signed agreement. The Centre registers commercial vessels involved in grain transport and tracks them via the Internet and satellites and supervises their inspection when loading them into Ukrainian ports and arriving at Turkish ports.