Turkey: There is a high probability that the first Ukrainian cereal ship will leave the port tomorrow 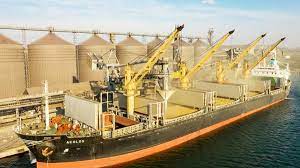 A United Nations-brokered agreement in Istanbul last week aimed at easing the food crisis and lowering global grain prices that have risen since the start of Russia's military operation in Ukraine.

A spokesman for Turkish President Ragab Tayyip Erdogan said on Sunday that there was a high probability that the first grain-loaded ship destined for export would leave Ukrainian ports tomorrow.

Ibrahim Qalin said: "If all details are completed by tomorrow, there would appear to be a high probability that the first ship will leave the port tomorrow. We will see ships leaving ports the next day at the latest, "according to Reuters.

The agreement also aims to allow safe passage of grain shipments to and from the ports of Chornomorsk, Odessa and Pevdini. Moscow blames Ukraine for stopping shipments due to the mining of port waters.

On Sunday, Ukrainian President Volodymyr Zelensky said that his country's grain harvest this year could be half the usual amount.

The Ukrainian president attributed this to Russia's special military operation in his country, which began on February 24.

Volodymyr Zelensky wrote in English on Twitter: "Ukraine's crop this year is threatening to be half as low," Reuters reports.

"Our main goal is to avoid a global food crisis due to the Russian invasion. Alternative ways of delivering grain shipments remain

Ukraine's Minister of Infrastructure, Oleksandr Kubrakov, had previously said that his country was ready to recharge grain from its southern ports.

Kubrakov told reporters at the southern port of Odessa that Ukraine was ready to ship grain from two ports under a United Nations-brokered agreement, but that no departure date had been set for the first cargo.

We have 80 guests and no members online