After almost 20 years of absence... Egypt assumes the presidency of COMESA 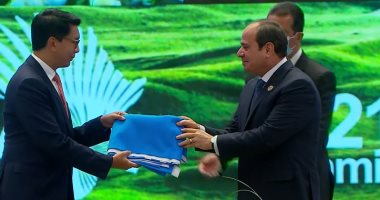 After almost 20 years of absence, Egypt assumed the presidency of the COMESA summit at a conference hosted by the administrative capital of Cairo in the presence of Egyptian President Abdel Fattah al-Sisi and a number of leaders, leaders and delegations of member States.

The Summit is being held under the theme "Strengthening resilience through strategic digital economic integration," with the aim of promoting the use of digital economy tools to facilitate business within the COMESA caucus and enhancing the resilience of Member States to cope with the negative repercussions of the CORONA pandemic on their economies.

During the opening session, President Alessa announced the launch of the Medium-term Strategic Action Plan 2021-2025 for COMESA.

This plan aims to deepen economic integration, regional integration and development among the States of the Community, in harmony with the Agreement on the African Free Trade Area.

Egypt had developed a vision aimed at deepening the integration of actions among the countries of the region to expand the pace of economic recovery from the Corona pandemic, building on those challenges and on the important role of COMESA as a regional economic grouping aimed at achieving the sustainable development of member States.

El Sisi said that the Egyptian vision for the presidency of COMESA was to launch a number of initiatives to contribute to deepening integration, in a number of economic sectors, in the short and medium term.

Egypt's view that business promotion - in its comprehensive sense of business, investment and productivity - would contribute significantly to accelerating recovery.

With regard to regional trade integration and the elimination of customs barriers, Egypt firmly believed in the importance of regional and continental integration and had always sought to develop intra-trade. Since joining COMESA, Egypt had applied the agreed customs exemptions under the free trade zone in accordance with the principle of reciprocity.

He stressed the need to remove any obstacles to Member States providing the necessary exemptions in that regard, by proposing the establishment of a mechanism to review the trade policies of Member States periodically; This will contribute to the effective participation of States in the implementation of customs concessions.

Egypt would pay close attention to promoting continental integration and encouraging signatory States to the Agreement on the Free Trade Area for the Three Groupings; to ratify the Convention for its application and its entry into force.

On industrial integration, the cooperation of the RCD States to increase intra-trade; It requires increased productivity and cooperation in the various manufacturing sectors and the utilization of the resources available to the States of the region and their competitiveness in increasing industrial production.

We have 275 guests and no members online